SPRINGFIELD, MO – In 1993 Seminole Baptist Temple began holding services in an impressive brick building at the corner of East Republic Road and National Avenue in Missouri’s third largest city.  Photographs of the church on that day reveal a building that looks pretty much the same as it does today. Inside, however, the church’s current sanctuary would scarcely be recognizable to a visitor from 24 years ago, except for the three prominent stained glass windows that tower over its worship stage.

Paragon 360 managed to keep the distinctive stained glass windows at the center of the church’s look, even while creating a completely new and very modern atmosphere, thanks to a carefully planned and skillfully executed renovation project that featured contemporary scenic elements, the installation of an HD video system, and a new LED lighting system anchored by CHAUVET DJ and sister company CHAUVET Professional fixtures.

“Seminole Baptist was looking to update the worship center space to make it more welcoming to all generations,” said Donnie Brawner, CEO of Paragon 360. “Lighting was an important part of this modernization plan. Aside from creating warm, inviting colors throughout the area, the new lighting system has been instrumental in accenting the scenic and architectural elements we added to transform the sanctuary, while still retaining the classical look of the stained glass windows.”

Among the most striking scenic elements put in place by Paragon 360 are faux rock towers positioned to the right and left of those windows. Accenting these towers is light from eight CHAUVET Professional COLORdash Batten-Quad 12 RGBA linear wash fixtures. 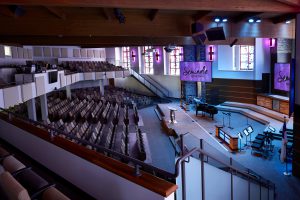 With their individually controlled LEDs, the COLORdash Batten-Quad 12 units lend extra texture and depth to the towers by washing their dappled surfaces in a variety of rich, colors that play off well against the sunlight refracted through the stained glass windows. The flicker-free operation of the COLORdash fixtures is essential to creating smooth video presentations for the church, which uses three Data Video PTZ Cameras installed by Paragon 360 to capture live services for internet streaming and local image magnification.

Paragon 360 also relied on eight CHAUVET Professional COLORdash Batten-Quad 6 wash linear fixtures to colorwash the insides of the modesty walls to the left and right of the center stage. “The modesty walls filled the space to either side of the center and connected these areas visually to the faux stone towers, the video panels and the windows,” said Clayton Avery, Paragon 360 Installation Lead & ETCP Certified Rigger.  “This creates a more engaging look for people inside the church and those watching on video.”

Rounding out this integrated look is a series of vividly illuminated wall sconces that flank the center stage windows.  Paragon 360 installed 20 CHAUVET DJ COREpar 40 USB COB LED fixtures behind the translucent sconce structures. Utilizing the wireless control feature of these par-style fixtures, the church can convey different moods during services and events by remotely changing colors.

“We like the compact size of the Chauvet fixtures,” said Avery. “They were easy to install unobtrusively behind and around the scenic elements.  Yet despite their size, the fixtures are bright enough to stand out against all the ambient light that enters the sanctuary through its prominent windows.”

The brightness of the Chauvet fixtures also allows them to work well with the church’s new laser projector large format HD video system that Paragon 360 installed.  Like the LED fixtures that accent many of the worship area’s distinctive architectural and scenic features, the new video screens could scarcely have been imagined when Seminole Baptist Temple opened its doors back in 1993. However, working together, the two are helping to ensure that this dynamic church enters its second quarter century ready to engage contemporary worshippers. 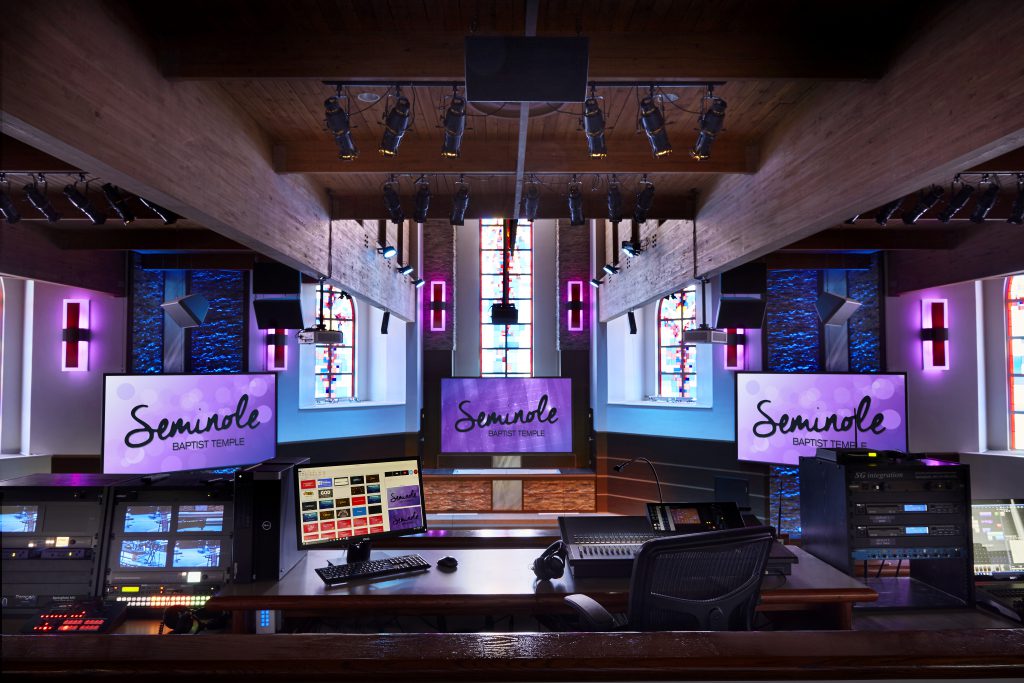 Error: An access token is required to request this resource.
Type: OAuthException
Code: 104
Please refer to our Error Message Reference.

The famed @Electric Ballroom in Camden is a dream venue for any performer. The space's incredibly versatile rig made up of Maverick MK1 Spot and Rogue R2 Wash fixtures offer an unlimited number captivating scenes for virtually any show.
📷: Rob Stainforth
#CHAUVETProfessional

Uber talented @akgaudio artists @rosslearmonth and @denholmharding collecting their #IVM4500 In Ear Monitors & #WMS40PRO guitar bugs so they can both monitor and play wirelessly at their performances. Enjoy guys.