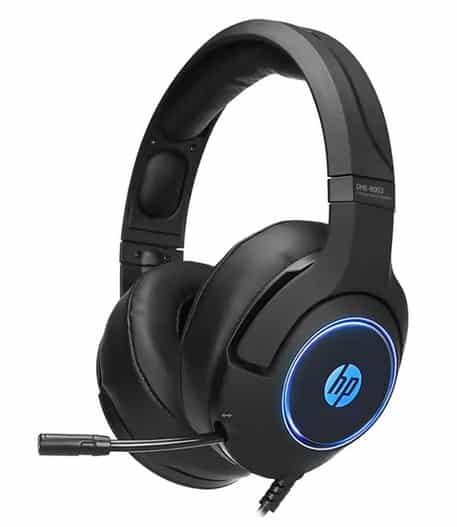 South African Pro Audio Distributor, Audiosure, recently added HP Headphones to their product profile. With their extensive background in Pro Audio, Studio and DJ Equipment they have the perfect channels and expertise to branch out in the Lifestyle Audio field. They let me check out the entry level USB gaming headphones before they landed in stores. Here are my thoughts.

The DHE-8003 headphones are for the most part constructed out of a robust matt black plastic with flat metal pieces used to reinforce the headband slide. The cup has 50mm drivers installed with a small microphone stem on the left that can be extended or retracted back into the cup. The driver side of the cups are covered in a soft, breathable, black leatherette material that totally covers your ears.

They are very comfortable, and the outside of the cups also have the blue backlit HP logo’s that can be switched on and off. The headband attaches to the cup at two points and also has a slight twist so the fit of the headphones is really snug on your head. There is no visible cable running from the headband into the cup. The headband is also plastic with the same soft breathable leatherette covering the inside of the headband for comfort.

The volume control is a large handle sized plastic controller, with switches for the lights on the headphones, and mic mute and an ambidextrous volume control wheel. This control portion is positioned quite close to the headphone itself. So, on a shorter person the control might lie on the desk but for me (just over 6ft) it feels a little strange dangling. It’s not in the way and doesn’t put any strain on the cable attachment into the headphone itself but the control itself is quite big so I feel it could be a little longer. The cable itself is an inexpensive 2M plastic covered cable that terminates in a flat USB connection.

So I plugged the DHE-8003 into my work computer, a robust Dell Latitude, and the audio worked instantly. No having to dig around in the driver settings and change everything. Skype worked the same way. Zero setup. Plugging into my iMac just required that I instruct OS X which audio device to use via right clicking on the speaker icon and they worked perfectly from there.

The DHE-8003 are very detailed and extremely good value for their price. They sound fantastic and really wrap around your head to isolate your hearing from the outside world. And it is a very immersive experience inside. They are light and comfortable and lend themselves well to extended sessions. The audio fidelity is solid, while remaining detailed. High resolution audio formats such as WAV, AIFF and FLAC audio are easily discernible on the headphones when compared to compressed streaming formats such as MP3.

The surround sound effect is great and really gives you a fantastic stereo image when gaming. I tested it on a decent spec gaming machine with Call of Duty – Warzone, Farcry 5, FIFA20 and ARK and playing through the game you can accurately discern direction and distance of sounds in games such as animals, vehicles, footsteps and most importantly shots coming your way. The retractable gooseneck microphone is clear with very little EQ or coloring of the signal and can be neatly stowed away in the cup housing or pulled out to be closer to your mouth for cleaner signal in a louder environment.

The stitching for the material on the one ear-cup wasn’t quite the same as the other on close inspection but it was the side with the microphone so I suspect there is a little more tech loaded into that side. That being said, the build quality is solid for a headphone in this price bracket.

The overall experience is fantastic and ticks all the boxes of the quality and connection options you would expect from a headphone bearing the Hewlett and Packard badge. It is certainly not competing with the high spec professional gaming sets from its Omen range, but it performs better than pretty much all the headphones in its class and with a suggested current retail price of R1200 you are getting great value for your own private audio environment, whether you are going to be using it for gaming or for work.

At the beginning of 2020, just before the COVID-19 pandemic took over the world, Masjidut Taqwa Mosque in Gqeberha enlisted the services of LineOut Productions in an effort to upgrade their audio system.With seriously high quality audio in the brief, LineOut’s Dave Opperman immediately thought that Martin Audio’s O-Line would be the perfect solution. “I had heard the O-Line system many years ago at an Audiosure demo in Johannesburg,” said Dave. “It was seriously impressive then and it is a great sounding solution that is economical on amplification and, of course, great to look at.”The O-Line from Martin Audio is an award-winning, aesthetically pleasing, modular micro line-array system designed for a wide variety of architectural applications. With this in mind, representatives from the mosque were extremely happy to have a system of such calibre installed into their venue.LineOut Productions installed a total of sixteen Martin Audio O-Line cabinets across two arrays, which are powered by two Wharfedale Pro CPD 2600 amplifiers. The entire system is running through a Wharfedale Pro SC26 Versadrive speaker management system, which takes control of all audio dynamic settings such as crossovers, EQs and limiters. A Samson CM20P Podium Mic on a CMB1 base with two CM11B’s Boundary microphones were also installed in various positions throughout the venue.Although 2020 was an extremely challenging year, the installation commenced before South Africa went into a nationwide lockdown at the end of March. The unique layout of the venue also posed a few challenges with regards to the positioning of the array. Despite these hurdles, the entire system was finally commissioned by LineOut Productions in September 2020.Audiosure are proud to have worked alongside LineOut Productions in providing the perfect solution for the Masjidut Taqwa Mosque. We wish them all the best with their system in the years to come. ... See MoreSee Less
View on Facebook
· Share

The Hakii Mars is a Portable Waterproof Bluetooth Speaker that features a 45mm speaker, Bluetooth 5.0 connection and an IPX7 water resistant rating. The battery offers up to 12 hours of play and it has magnetic clip so you can easily carry it around. The Mars can also be used to answer calls and it has built-in support for voice assistants like Siri, Google Assistant and Alexa. Now available from your preferred gear store or contact us to stock them in your store. ... See MoreSee Less
View on Facebook
· Share

The Hakii Cheer is a compact Bluetooth Speaker with a built-in battery and is also waterproof. The speaker offers 30W Dual Drivers with weighted bass radiators to produce a solid and deep sound with two EQ modes on offer. Two Cheers can also be paired together to get a 2.0 Stereo connection. The built-in 5200mA Battery offers up to 14 hours of play time on a 4 hour charge and the Cheer can be immersed in 1M of water for 30min so they are water resistant. For easy pairing the Cheer also has NFC. Watch as product specialist Dave Skinz reviews the speaker for us.Now available in South Africa.Contact Audiosure to chat about stockists or how to get Hakii into your store. ... See MoreSee Less
View on Facebook
· Share

Have you have a chance to explore the Audiosure YouTube page yet? We have detailed video reviews and product walk-through with our knowledgeable team of brand and product specialists on a wide range of gear from Digital Desks like the Allen & Heath QU series, to a standalone studio setup like the Akai MPC Live. Like our videos and please subscribe to support and you will be notified every time we post a new video on the channel. ... See MoreSee Less
View on Facebook
· Share

As we expand our profile we are on the look out for account managers for our Gauteng, Cape Town and Durban Offices. Click on the link below, have a peek at the job descriptions and if you are interested then mail us your CV and lets chat.http://audiosure.co.za/careers/ ... See MoreSee Less
View on Facebook
· Share

🎹 Introducing the all new Alesis Qmini MIDI software controller. Featuring great feeling keys, essential controls, and convenient USB bus power, the Qmini makes it easier than ever to capture MIDI in the studio or on the go. Click the link for more info: https://fal.cn/3ffQ7